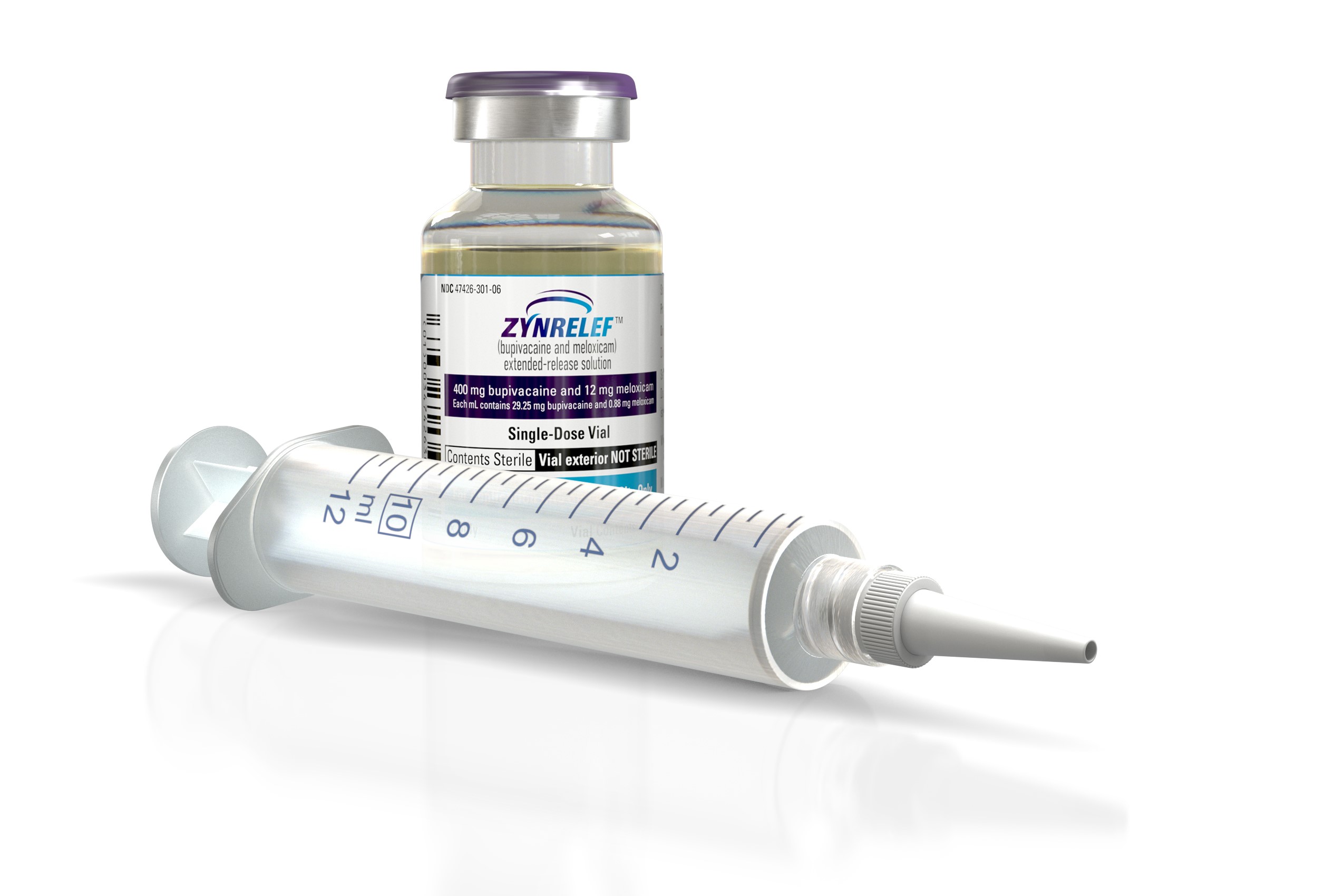 The FDA has approved a Heron Therapeutics combination drug developed to treat postoperative pain and help patients avoid the need for opioid painkillers, a regulatory decision that comes after the agency twice turned down applications from the biotech.
The Heron drug, a solution that pairs bupivacaine with meloxicam, is approved for treating postsurgical pain for up to 72 hours following three types of procedures: bunionectomy, open surgery hernia repair, and total knee replacement. San Diego-based Heron, which will market the drug under the name “Zynrelef,” expects to launch the product in July.
The anesthetic component of Zynrelef is bupivacaine, an old pain drug that is currently the standard of care local anesthetic for controlling postoperative pain. Heron’s drug combines bupivacaine with meloxicam, a nonsteroidal anti-inflammatory (NSAID) drug. Though the Heron drug is intended to address postsurgical pain it’s administered as part of the surgical procedure. A solution, the drug is applied to the tissues of the wound before the wound is closed.
According to Heron, meloxicam increases the analgesic effect of bupivacaine. Extended-release Zynrelef releases both bupivacaine and meloxicam over the course of 72 hours after application to the wound, and those compounds are absorbed by surrounding tissue. In Phase 3 tests that assessed the drug in bunionectomy and hernia repair, Heron reported that the drug met the main goal, a measure of pain intensity. The drug also achieved secondary goals for the studies that included assessing whether a patient’s pain required additional rescue treatment with an opioid.
“By delivering sustained levels of both a potent anesthetic and a local anti-inflammatory agent directly to the site of tissue injury, Zynrelef was designed to deliver superior pain relief while reducing the need for systemically administered pain medications such as opioids, which carry the risk of harmful side effects, abuse and addiction,” Heron said in its 2020 annual report.
The company says its drug’s extended-release feature is key to helping patients avoid the need to turn to opioid painkillers. Patients experience the most severe postsurgical pain in the first three days following surgery, and that’s when they are most likely to need opioids for pain management, Roy Soto, an anesthesiologist at Beaumont Health System, said in a prepared statement.
More 50 million surgical procedures are estimated to happen in the U.S. annually, Heron said in an investor presentation. Citing a Medicare claims data, Heron said that 67% of patients filled an opioid prescription between 30 days before surgery to 14 days after the procedure.
The FDA first rejected Heron’s drug in 2019 due to manufacturing problems. The company resubmitted its application only to have the regulator turn it down again last year, citing the need for additional non-clinical information. In both cases, the FDA did not raise any safety concerns, nor did it require new clinical trials.
Last September, the European Medicines Agency granted marketing authorization for the Heron drug as a treatment for postoperative pain from small- to medium-sized surgical wounds in adults. That approval does not extend to major surgeries including abdominal procedures, and vascular and thoracic surgeries. The FDA approval has similar limitations.
Heron had sought a broad label for the drug, and based on discussions with the FDA, the company believed that its clinical studies were sufficient. But last week the regulator told the company that more clinical data are needed to support approval in additional surgical procedures, according to the investor presentation. The company added that it is conducting additional clinical research to support expansion of the drug’s label to include other procedures.
Zynrelef has been tested in more than 1,000 patients so far. In those clinical studies, the most common side effects were constipation, vomiting, and headache. But the prescribing information includes a black box warning that notes the NSAID component of Zynrelef brings an increased risk of cardiovascular complications, including heart attack and stroke. The boxed warning also says the drug should not be used for coronary artery bypass graft surgeries. Other risks include bleeding, ulcers, and perforation of the stomach or intestines, which can be fatal. Elderly patients and those with history of ulcers or gastrointestinal bleeding face a greater risk of these complications.
Heron said it will provide Zynrelef in two doses; the 200 mg bupivacaine/6 mg meloxicam dose will have a wholesale cost of $135.50 and the 400 mg bupivacaine/12 mg meloxicam dose is priced at $267.50. According to the company, those prices represent savings between 22% and 28% compared to the wholesale cost of Exparel, a long-acting version of bupivacaine marketed by Pacira Biosciences. In 2020, the Parsippany, New Jersey-based company reported $417.8 million in sales for the drug.
Allay Therapeutics aims for pain relief lasting two weeks
There are other companies are trying to improve upon bupivacaine and help patients avoid the need to manage postsurgical pain with opioid medications. Allay Therapeutics announced Thursday preliminary clinical data from a small study showing postsurgical pain relief lasting two weeks after a single dose of its drug, ATX-101. The drug candidate, which is dissolvable, incorporates bupivacaine.
Menlo Park, California-based Allay said its drug was evaluated in Phase 1b/2a testing as a treatment for pain following total knee replacement surgery. The clinical trial was an open-label, dose-ranging study conducted in Australia. Of the 22 knee replacement patients enrolled, 15 received the 1,500 mg dose, the highest of the three doses tested. The study was initially planned for up to 30 patients and doses ranging up to 2,000 mg. But Allay said the study concluded early after the 1,500 mg dose showed “compelling pain reduction and opioid use reduction.”
Allay was founded in 2017 by The Foundry Incubator and Lightstone Ventures’ Singapore fund. In 2019, the startup completed a $25 million Series B financing, led by New Enterprise Associates. Lightstone Ventures and Brandon Capital Partners also participated.
Allay said it plans to advance ATX-101 to a Phase 2b test in the U.S. later this year.
Photo by Heron Therapeutics
Promoted